Words can’t describe just how giddy we were for Christmas to come this year.
Typically our Christmas countdown starts in December
as we get excited for the holidays and spend 25 days looking forward to Christmas morning.
This year, our Christmas countdown started a tad bit earlier…
Right after booking our cruise to the Caribbean in June, we all installed Norwegian apps
on our phones helping us to count down the minutes until our departure to the blue open waters
(yes, we were only a wee bit excited).
And let me tell you, the anticipation and waiting were well worth it.
Truly it was the best Christmas ever.
We will all forever cherish the memories and adventures we shared together.

The first night we flew to New Orleans.
Flying was especially exciting due to the fact that we had two first time fliers, Caitlyn and Cade.
It was so much fun watching their faces as we lifted off.

Christmas time in New Orleans is magical in its own way.
We all loved the southern hospitality we received as we roamed the town the night before boarding our cruise.
We enjoyed a true Louisiana style dinner at Bubba Gumps and topped off the meal with deliciously warm beignets.
It was fun to share the Christmas excitement in a new city together. 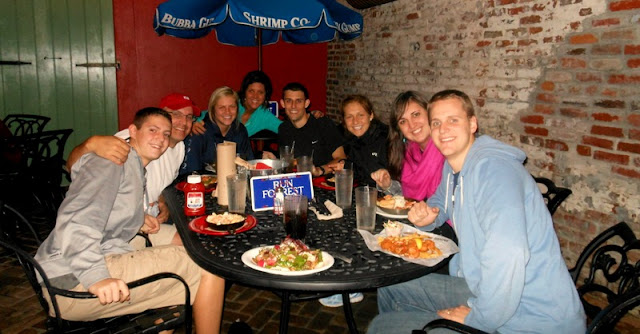 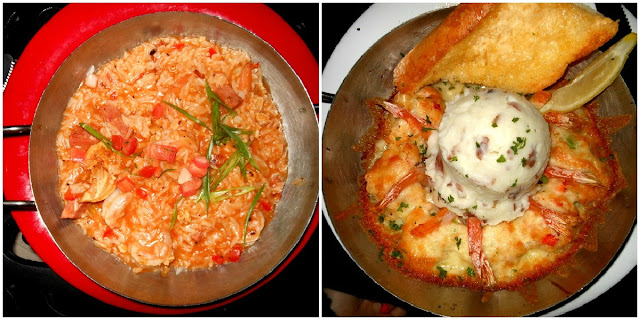 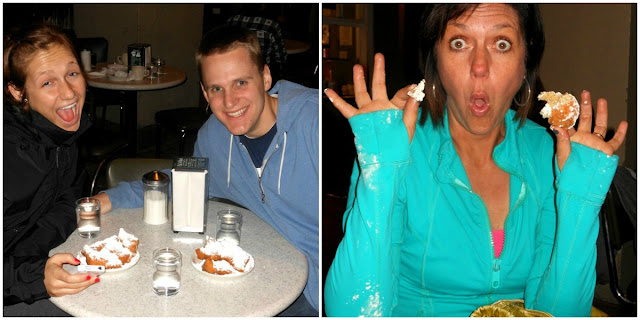 We could hardly contain our excitement the following day as we prepared to board the ship.
We were all giddy with excitement as we dropped off our baggage and stepped on board.
The ship was decked out in Holiday décor which made it all the more magical.
Our rooms were perfect located side by side, each equipped with their own balconies. 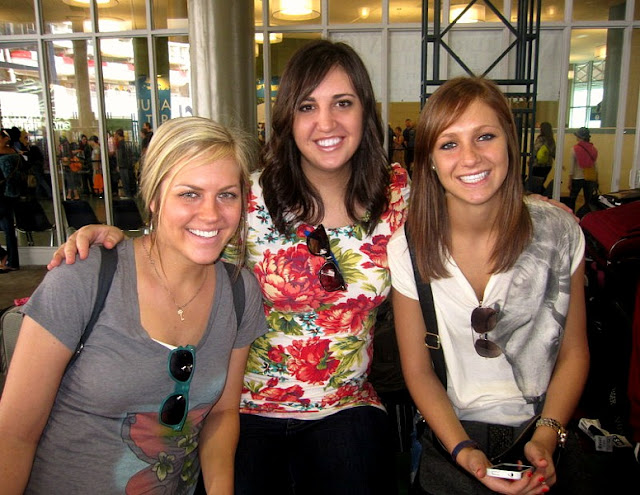 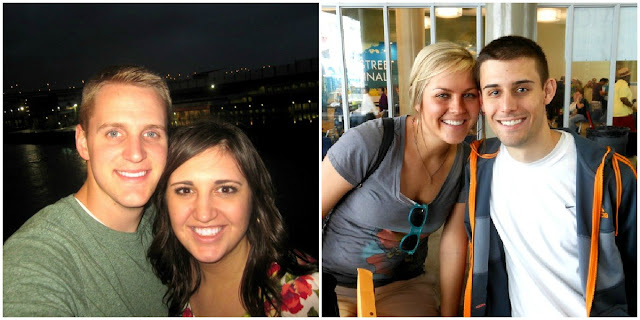 Our first stop was Costa Maya, Mexico.
We started by walking around the beautiful city not really having any specific plans in mind.
Soon enough we found ourselves being pulled into a nearby alley,
talking to a town local who offered to take us to a private beach.
After some negotiating, and a very sketchy taxi ride, we arrived at a beautiful beach in Costa Maya.
It was quite the exclusive oasis.
White sandy beaches, unlimited fruity drinks, hammocks, kayaking, and pure pure bliss.
It was a great way to kick off the vacation. 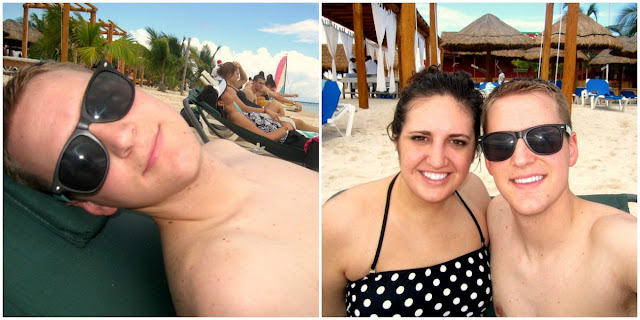 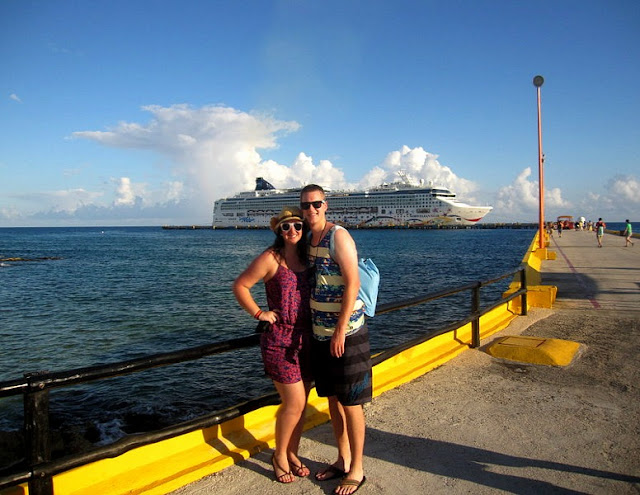 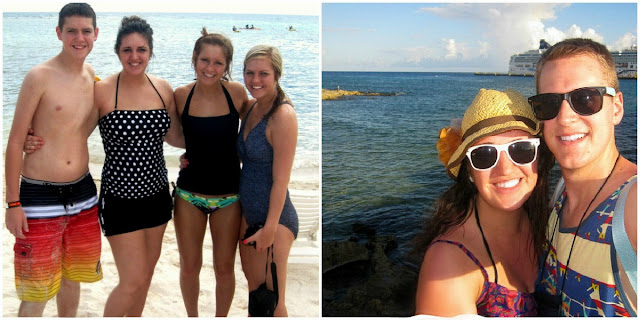 Next stop, Belize City.
Belize was an adventure in every sense.
I think prior to the cruise, we were all looking forward to visiting Belize more than any other port.
The plan was to go cave tubing and zip lining.
Sounds  like a dream, right?
After an hour long ride through Belize city to the inner Jungle we were greeted by a rain forest down pour.
After being drenched from head to toe we started to make our way to the entrance gate of the jungle national forest.
Let me just say, it was pure chaos.
In order to get entrance to the jungle, you are required to have a tour guide. Easy enough, right?
Wrong.
Our tour guide ended up slipping through the entrance gate without our family,
leaving us to be stranded in the middle of the jungle.
The gate police WOULD not let us pass without a tour guide.
The day turned into a lot of commotion, frustration, and laughter.
Let me put it this way, Belize was truly"unbelizeable".
After a long morning, we finally caught a ride back to the main city and port.
WHAT AN ADVENTURE.
We all agreed that Belize was something that we would never forget. 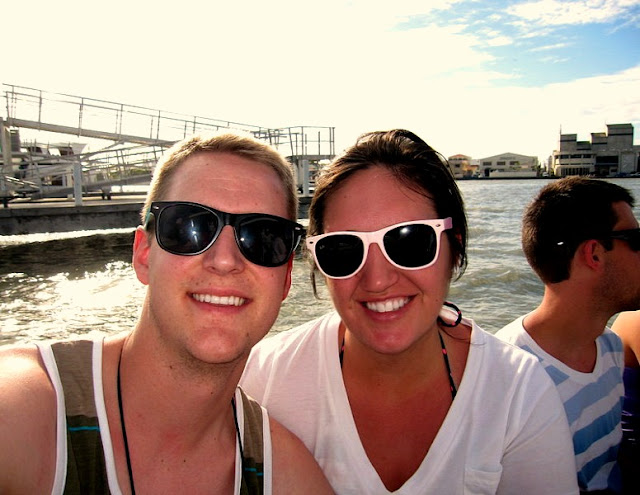 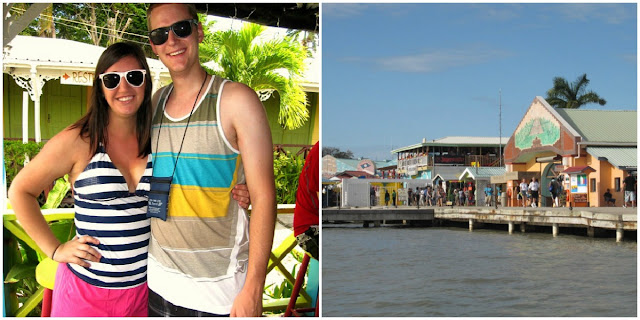 Here we go to Roatan, Honduras.
Unanimously, Roatan was by far our favorite stop on the cruise.
It started when we pulled into the port in the morning and all opened our windows to our balconies.
Our breaths were truly taken away by the beauty of the country.
It was a jungle oasis that we could not wait to explore.
We were all slightly apprehensive about booking another excursion,
especially after the disaster from  the previous day in Belize,
but in the end we trusted our guts and decided to book another zip lining and snorkeling excursion.
BEST DECISION EVER.
We started the day by zip lining through the jungles of Honduras.
It was SO much fun. I cannot put it any other way.
We then met up with our chauffeur who took us to our private tropical resort.
It was the most fun. EVER.
Looking at this picture of our family, just brings a smile to my face.
I was truly in the most beautiful place i had ever been, but not only that,
with the people I love the most.
We will forever cherish the memories we created in Roatan.
It was relaxation, excitement and discovery as we snorkeled through the blue waters,
and just pure pure bliss. 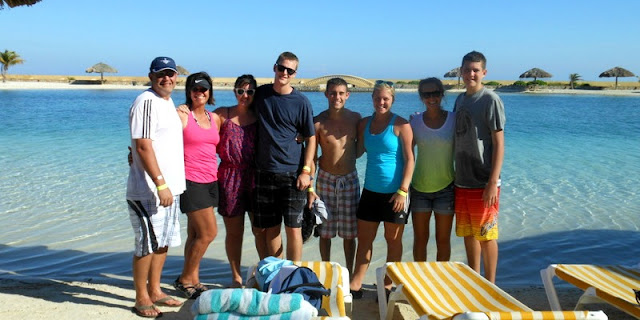 One of the other things that we all agreed made Honduras awesome, was the people we met.
Our zip line guides we hilarious. Making us all feel comfortable and laugh the whole way down.
We also fell in love with our chauffeur, Edder.
He became more than someone who just drove us around from place to place,
but someone who we would consider and call friend.
We had a blast laughing with him and learning about his life.
The trip would not have been nearly as fun without him.
After wrapping up a day in Honduras, typically that is when a chauffer would take us back to the ship,
but after finding out that we were LDS, Edder wanted to show us the beautiful mormon chapel.
We took a quick detour to tour the beautiful city and talk about the gospel
(we even stopped, holding up traffic, to take a picture on the longest bridge in Roatan).
We will forever be grateful for Edder and his hospitality and kindness. 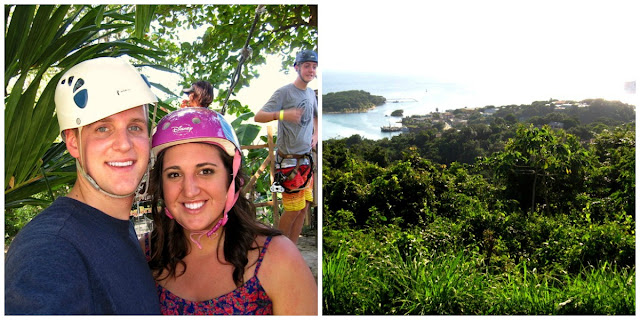 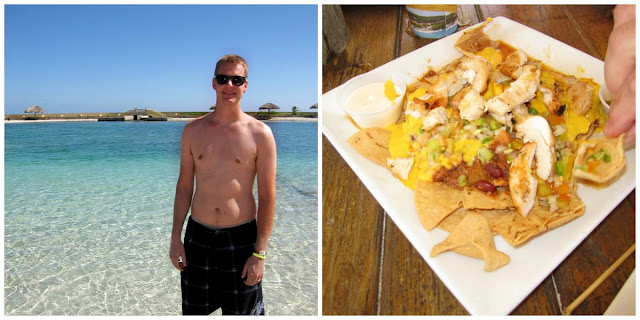 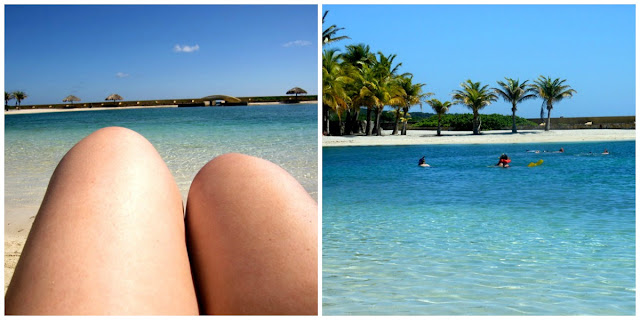 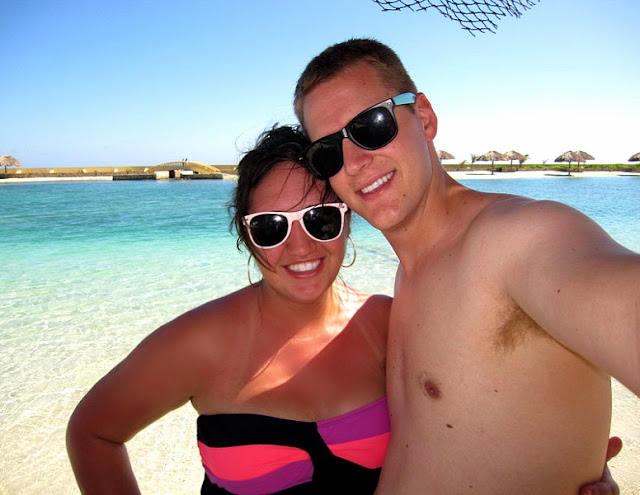 To Cozumel we go
We all decided we could not visit Mexico, and not visit some of the ancient ruins.
And on December 21st (end of the Mayan calendar), why the heck not.
We decided to complete the trip by making a stop to Tulum.
Tulum was awesome.
The ferry ride getting there, not so much.
After a 45 minute ferry ride in 10 foot swells, we were all glad to get to hit land.

Visiting ancient ruins was both a dream for my Dad and I.
We have always wanted to see these historical and beautiful formations.
The fact that we had a tour guide named Moroni, made the experience even more spectacular.
It was awesome to learn the history of the ruins and how they correlated to our beliefs.
We had a blast exploring Tulum
(and not to mention starring at the "end of the worlders" who scattered the city).
Again, it was a true adventure in every sense and a great way to wrap up the trip. 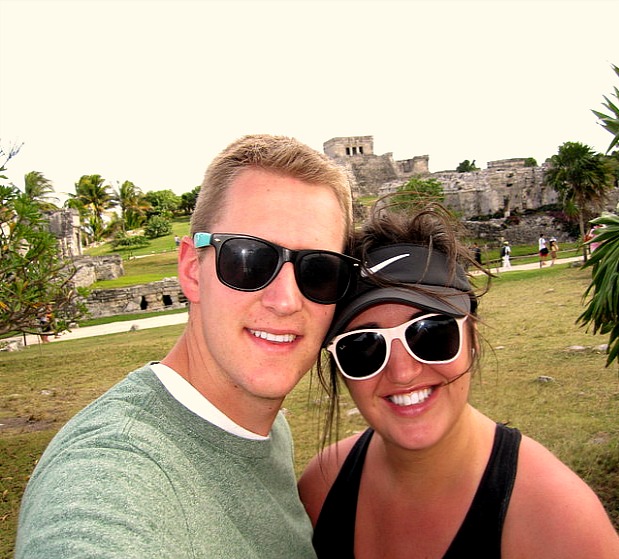 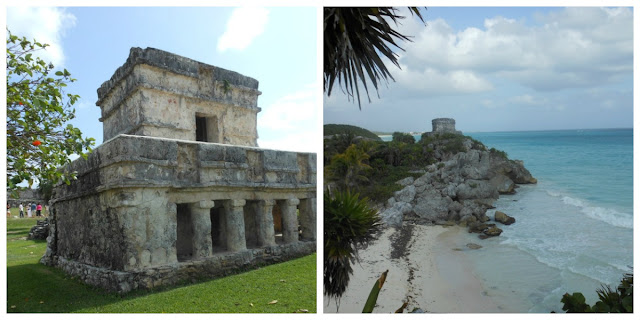 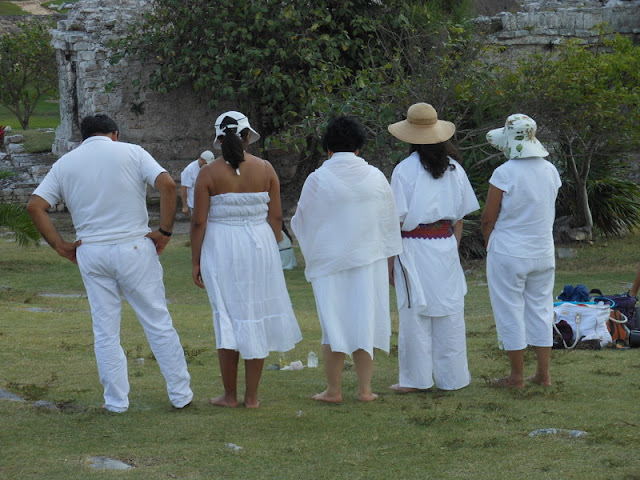 MMMM... THE FOOD
Oh boy it was good. Every night we would each order several entrees.
Favorite night by far was the night the ship served lobster tails. We each ordered 4-5 tails.

SSIC (SOFT SERVE ICE CREAM)
Cade was absolutely obsessed. We probably went 5-6 times a day to get our dose of ice cream.
By the end of the trip he had abbreviated the name and would ask us,
"Hey anyone want to go get some SSIC." I am telling you, true obsession.

SHUFFLE BOARD
One of the nights, we decided to hit the deck and play a game of shuffle board.
It was so much fun as we discovered and learned the games of the rules together.
We played several games, boys and girls.

DEAL OR NO DEAL
Prior to waiting for one of the cruise ship performances,
there was a game of "Deal or No Deal" in the theater.
We all became QUITE engaged in the game.
Screaming out "DEAL" ,"TAKE THE DEAL", "CASE #7", became quite the fun little game.
We became so into the game, that my Dad actually bought two cards to participate.
We were all ecstatic when the announcer stated that he had won $50.00.
You would think we had all won the million dollar lottery.
We were standing, screaming, hugging.
People must have thought we were crazy.

PEOPLE WATCHING
Let me tell you, a cruise ship is the ideal place to "people watch".
We all got a kick out of some of the people on board.
Laughing hysterically at some of the things people did and say was definitely a highlight of the trip.

And back to reality...
I think we were all in a daze as we boarded the plane back to SLC
(not to mention shock as we returned to the cold weather and SNOW).
For days on end we have been reflecting on our trip and laughing in reminiscence.
To be honest, it has to have been my favorite trip I have ever been on.
The beautiful jungles, white beaches, and blue waters were magical and unforgettable.

A lot of people have asked me since being home what my favorite part of the trip was...
by far and without doubt...
experiencing the entire adventure with my family.
Nothing in the world brings me more joy than making memories with those folks.
I am SO grateful for my family and for the opportunity
we had to share such an awesome adventure together.
It was truly unforgettable and something that we will always forever cherish. 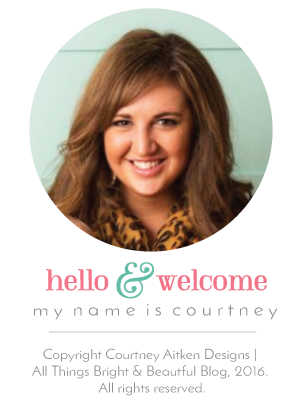 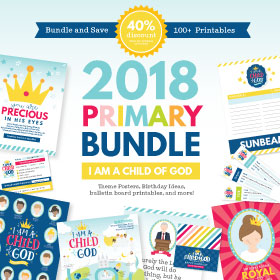 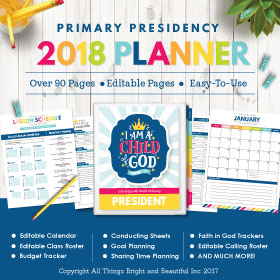